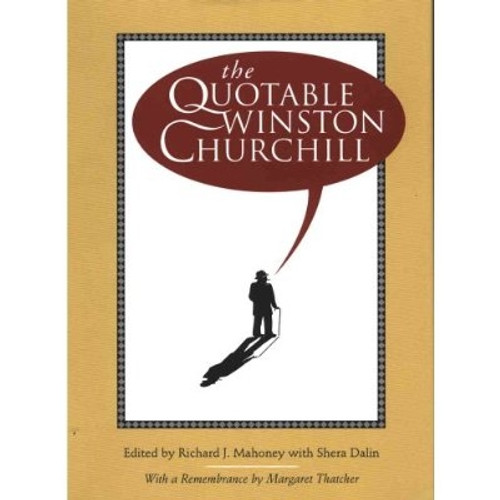 The Quotable Winston Churchill Richard J. & Dalin, Shera ( Eds. ) Mahoney (Author) Quote Churchill with authority! This handsomely-bound and illustrated 6" x 8" volume makes a fantastic gift, providing an invaluable and delightful, as well as authoritative, reference on the sayings of the man who mobilized the English language and took it to war -- and peace. This volume assembles some of the most memorable commentary from one of the world's greatest leaders. Winston S. Churchill is best understood through his own observations, comments, anecdotes and witty repartee. The quotes reflect a modern sensibility set in an American context for contemporary readers. They include some of Sir Winston's most famous utterances and some that give readers a glimpse into the endearing, compassionate leader of the United Kingdom during a period of intense strife. Containing over 200 pages of Churchill's pithiest words and observations organized in sections on Vices, Government and Economics, Nations, War, People, Socialism and Communism, Leadership, Animals, Women, and Oratory and Words, the book also honors the creation of the Winston Churchill Memorial and Library in Fulton, Missouri -- the site of Churchill's famous 1946 "Iron Curtain" speech. All profits from the sale of the book go toward the renovation of the Memorial. In addition to the wit and wisdom of Churchill, this delightful volume includes a remembrance by former British Prime Minister Margaret Thatcher. About the Author: Richard J. Mahoney is the former chief executive officer and chairman of Monsanto Company. He has also served as director of Metropolitan Life Insurance Company and Union Pacific Corporpration, and is a trustee of Washington University in St. Louis, where he is Distinguished Executive in Residence at the Weidenbaum Center on the Economy, Government and Public Policy. Hardcover: 159 pages Publisher: Winston Churchill Memorial and Library (2005) Language: English ISBN-10: 0976784300 ISBN-13: 978-0976784302 Product Dimensions: 7.6 x 5.6 x 0.8 inches
×

Dinner with Churchill: Policy-Making at the Dinner Table (Hardcover)